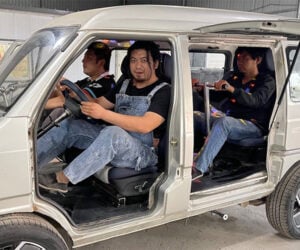 Maker Handy Geng was tired of being unproductive while sitting in traffic, so he got the idea to modify an old minivan and turn it into a gym on wheels. The driver and passengers can all work out at the same time, and the energy they generate powers the van’s drivetrain. Turn on captions. 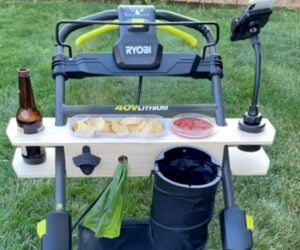 Matt Thompson loves to build things to make life in and around his house more convenient. Among his many creative inventions is this lawnmower tray which lets him snack, enjoy a cold beverage, and watch the game while cutting the grass. He’s also made a version for his treadmill. 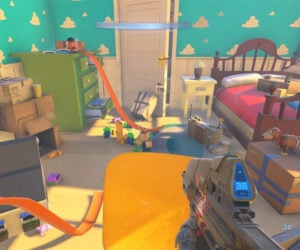 The Halo Infinite Forge lets fans build their own custom game environments. YouTuber Red Nomster spent countless hours using the modding tool to built a level based on Andy’s Room from Toy Story. Not only does it look incredible, but the object scaling makes players feel like they’re the size of an action figure. 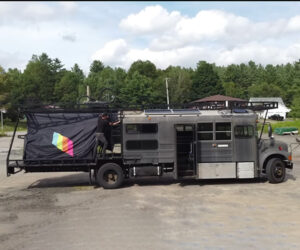 If you find yourself at the end of the world, buddy up with Gordo from Earth. He transformed a 2003 International Blue Bird school bus into a mobile workshop. It has solar and generator power, a massive roof rack, beds for four, and a rear deck with a crane for moving gear. Mobile Dwellings takes us on a tour of this awesome rig. 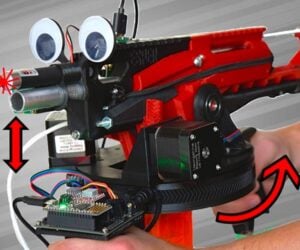 There are lots of cool NERF guns and NERF mods out there, but very few of them actually help with your aim. 3DprintedLife engineered this cutom build which can lock onto targets and track them automatically, reducing the chances of missed shots. The main blaster is based on a kit from CaptainSlug. 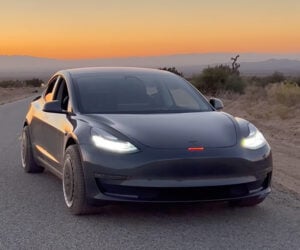 The Knight Industries Two Thousand was a modded 1982 Pontiac Trans Am. Retro Recipies wanted to update the design with a modern car, so he took a Tesla Model 3, fitted it with replica Turbo Cast wheels, LED chase lights, a spoiler, and blacked-out trim. It also plays KITT’s voice, and performs a light show to go with. 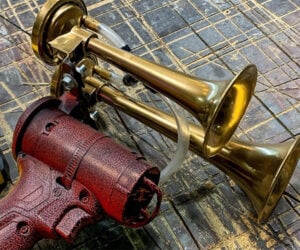 If you want a loud noisemaker, you could always buy one of those compressed air horns, but if you prefer something that you can reuse over and over, check out HABU’s build – which uses a modded cordless power drill and a small compressor pump to blow air through a pair of horns.

Turning a Scooter into a Three-Wheel Car 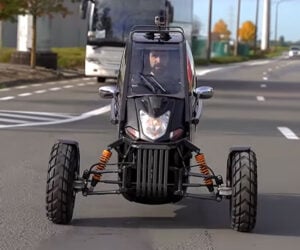 Meanwhile in the Garage took an ordinary gas-powered scooter and transformed it into a three-wheeled vehicle that looks like something from the set of a sci-fi movie. He initially had built a cockpit that kept it as a two-wheeler, but later grafted on the front of an ATV for its final appearance. 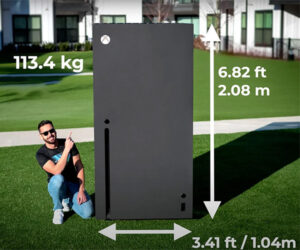 We just checked out what is likely the smallest working PS5 console. We now have the opposite – a gargantuan Xbox Series X that’s nearly 7 feet tall. Michael Pick teamed up with ZHC to build and decorate this beast, and yes, it plays games. It’s since been donated to the YMCA Youth and Teen Development Center in Atlanta, GA. 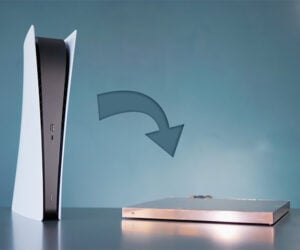 If the past is any indication, Sony will eventually release a smaller PS5. Matt at DIY Perks couldn’t wait, so he got to work stripping down its parts and created his own PS5 Slim. By moving its power supply to an external brick and building a custom copper water-cooling system, he dramatically cut down on its size. 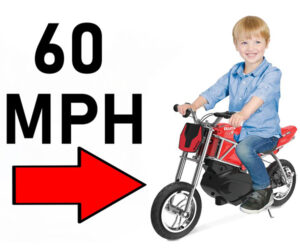 The Razor RSF350 is a pint-size electric motorbike for kids. But with a top speed of 14 mph (9 mph with an adult riding it), it’s not exactly fast. JoelCreates figured it could use a few more horsepower, so he outfitted it with an overpowered battery pack and motor controllers. Then, he put his mini-mini to the test in a drag race. 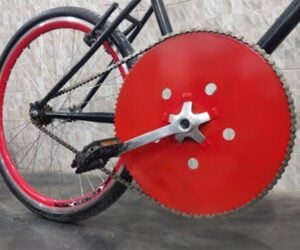 The greater the ratio between a bicycle’s crankset and rear gear, the faster its wheel turns. Taking that idea to the extreme, Filipo TV cranked up their bike’s top speed by making a huge 102-tooth gear. While it’s crazy fast on a bike stand, the drag caused by weight, air resistance, and friction limit its real-world potential. 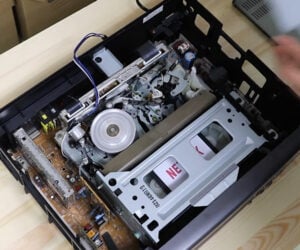 In the early days of Netflix, they shipped movies on DVD through the mail. Before that, movies came on VHS tapes from places like Blockbuster. Modder Marina Fujiwara was feeling nostalgic, so she decided to rig up an old VHS tape player to stream Netflix shows when a cassette is inserted into its mechanism. 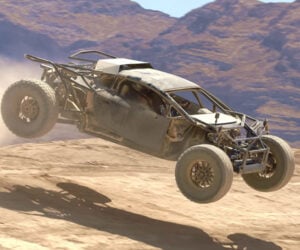 This insane vehicle started life as a Lamborghini Huracan, but now has an off-road suspension and an LS engine swap. B is for Build and the car’s owner Chris Steinbacher teamed up with Mint 400 and Mad Media head honcho Matt Martelli for a look at the car as it took to the desert for initial shakedown testing. 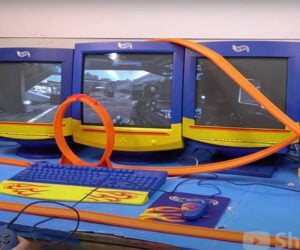 If you spent any time using computers back in the 1990s, you might remember the electric blue Hot Wheels PC with the flame job. Shank Mods took one of these colorful computing relics and rebuilt it with the latest high-performance PC hardware, then set up a bank of three of the matching CRT monitors for widescreen gaming. 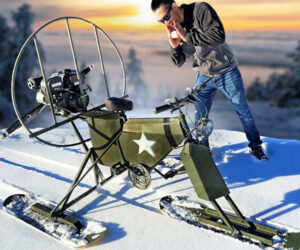 Maker Peter Sripol adds to his collection of homebrew vehicles with the creation of a custom bicycle that can glide across snow, and is pushed along by a propeller. He and his brother first stabilized the bike frame by turning it into a trike, then added a trio of snowboards and a paramotor engine. 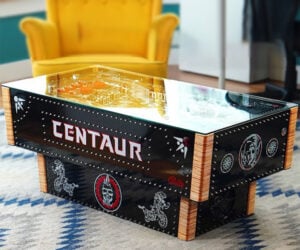 Several years back, we came across some coffee tables made from pinball machine parts, but you couldn’t actually play them. BuildXYZ wanted a playable machine in the space of a coffee table. So he took one of our favorite classic pinball machines, Bally’s Centaur, and completely rebuilt it into a more compact form factor. 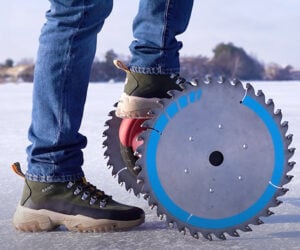 We’ve seen how circular saw blades can be used to provide traction on ice – at least until they cut all the way through. The Q modified one of those wheeled “hoverboards” to ride on saw blades. He added metal plates to each of the blades’ teeth so it doesn’t dig in as much, but we still wouldn’t want to fall onto them. 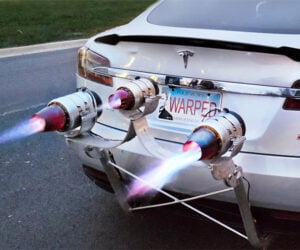 One of the main reasons people buy a Tesla is that it runs on electric power. So the idea of outfitting a Model S with jet engines seems pretty counterintuitive. Warped Perception not only equipped his car with a trio of jet engines, he went the extra mile by adding a console with aircraft throttle controls inside the cabin. 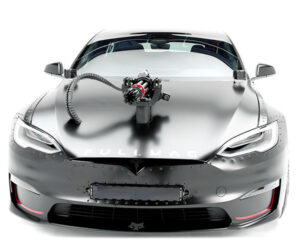 When it comes to car acceleration, you can’t get much quicker than a Tesla Model S Plaid. FullMag equipped a Model S Plaid with a working M134 Minigun that just might be enough to convince slower cars to get out of the left lane. A second video shows a test firing with blanks and a night vision drive. (Thanks, Chris!) 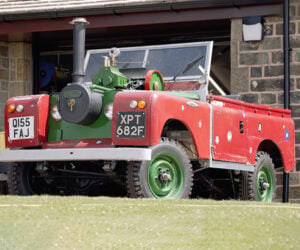 Land Rover is working on electric versions of its vehicles. But this particular British SUV has driven in the opposite direction. Its builder Frank Rothwell explains how he replaced its internal combustion engine with a steam-powered one. It runs on coal, ignited with wood kindling soaked in diesel fuel, so it’s not exactly eco-friendly. 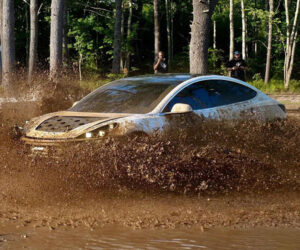 The Tesla Model 3 is a modern and zippy electric daily driver. Now it’s off-road capable thanks to Rich Rebuilds and Grind Hard Plumbing Co.. They started with a totaled Model 3 with all-wheel-drive, fixed its electrical issues, widened its wheel spacing, lifted it 2″, and added a 12,000 lb. winch and Falken Wildpeak off-road tires. 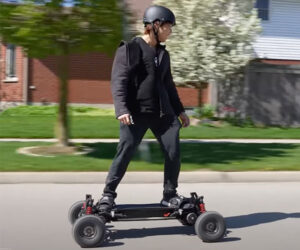 The team at Hacksmith Industries specializes in over-the-top builds. In this video, mechanical engineer Jeff got his hands on an off-road capable electric skateboard and upgraded its motors, battery pack, and circuitry to produce way more power than most people would feel comfortable with beneath their feet. 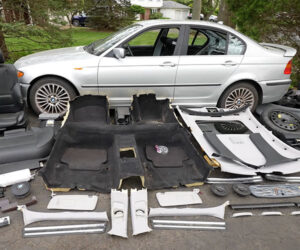 Reducing weight is one most important things you can do when it comes to performance cars. Automotive enthusiast ChrisFix wanted to see just how much weight could be stripped out of his BMW E46 3-series in preparation for track usage. He also tested the impact of the weight loss on acceleration and braking. 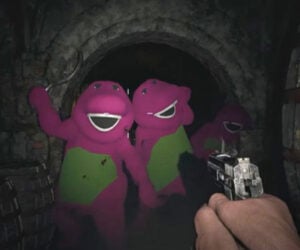 To add to the replay value of Capcom’s Resident Evil Village demo, MarcosRC created a mod for the PC version that replaces the game’s creepy monsters with something even more terrifying: Barney the purple dinosaur. We can almost hear the pained echoes of “I love you, you love me, we’re a happy family” in the distance. 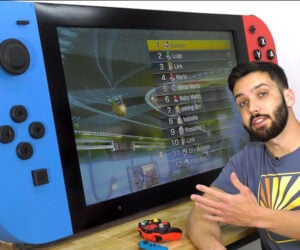 One of the best things about the Nintendo Switch is its ability to go from a handheld to a home console. If you prefer to play on a big screen, then Michael Pick’s mod is for you. The builder created this fully functional Switch with a TV and custom-made buttons. Best of all, he donated it to Saint Jude’s Children’s Hospital.