Popcorn on Church Organ and Drums 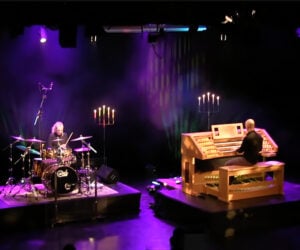 You might not remember the band Hot Butter, but you’ve probably heard their tune Popcorn at some point. The 1969 instrumental track was one of the earliest examples of synth-pop. Elias Niemelä and Suvi Buckman of Drumorg replaced the original’s Moog synthesizer with a church organ and upgraded the drum kit.

The Commodordion: A Commodore 64 Accordion 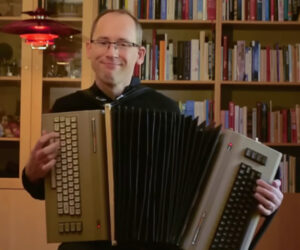 Known for its graphical and sound abilities, the Commodore 64 personal computer was home to some of the best games of the 8-bit era. Engineer Linus Åkesson took advantage of its audio capabilities to build this unique accordion which consists of two C64 computers connected by bellows made out of floppy disks and tape. 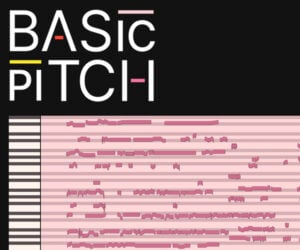 Spotify’s Basic Pitch is free-to-use, Open Source software that uses machine learning tech to convert tunes you hum, sing, or play on a single instrument into a MIDI file that can be used to control digital synthesizers. You can download and run the software locally, or try it out right now on their demo website. 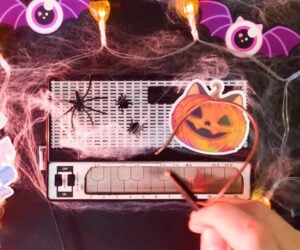 The Halloween franchise is really, truly, finally coming to an end. To celebrate the end of the road for Laurie Strode and Michael Myers, maromaro1337 performed John Carpenter’s intense electronic theme on a Stylophone. The driving, repetitive melody seems perfectly suited to the monophonic analog synthesizer. 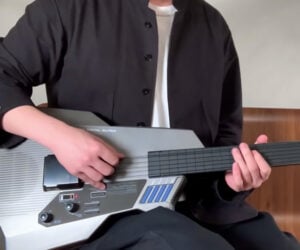 Musician Ichika Nito got his hands on a Casio DG-20, a 1980s gadget that used guitar strings and a fretboard a MIDI controller. He then proceeded to demonstrate why this thing might just be the coolest instrument ever. Enjoy some more Casio shredding action here. 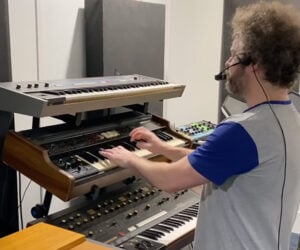 Musician Luke Million has an awesome collection of vintage synthesizers – and he knows how to get the most out of them. In the first video clip, he performs a series of classic 1980s jams with spot-on sounds, then does the same for movies and TV shows in the second video. His recreation of Running Up That Hill is perfect too. 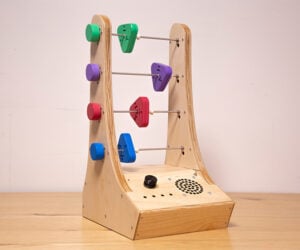 Electronic instrument maker Elias Jarzombek created this unique synthesizer that looks like an abacus. The otherworldly sounds it makes are controlled by sliding and spinning its triangular “beads” on metal bars, along with turning its side dials. Read more about the Abacusynth on Elias’ website. 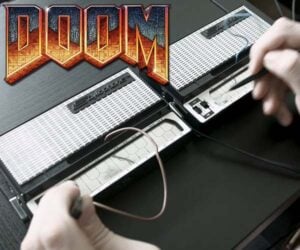 Stylophone expert maromaro1337 performed a medley of the heavy metal music hidden in plain sight in the corridors of the 1990s first-person shooter, DOOM. The game’s soundtrack swiped riffs from Metallica, Pantera, AC/DC, and Anthrax, among others. See how many you can identify without opening your eyes. 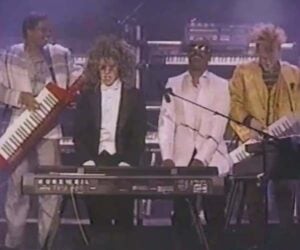 In the 1980s, musicians started to put synthesized sounds at center stage in their performances. This gem of classic footage brings us back to the 1985 Grammy Awards, during which Thomas Dolby, Howard Jones, Herbie Hancock, and Stevie Wonder joined forces for a synthesizer spectacular. The late John Denver kicks things off. 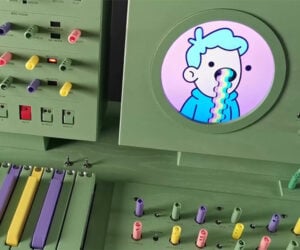 Love Hultén is back with another awesome custom build. The Doodlestation is an analog synthesizer with a playful aesthetic. It combines Sequential, Moog, and Hologram modules, a theremin, and a tape-loop echo. Complementing its easter egg colored keys and patch cables is a visualizer with a dude barfing a rainbow. 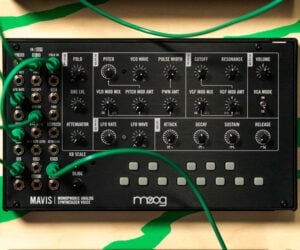 The Mavis is a build-it-yourself analog synth kit that embodies the spirit of Moog. The compact instrument has a 24-point patch bay, an analog oscillator, a voltage-controlled filter, a 4-stage envelope generator, and a sample-and-hold circuit. It easily integrates with any Moog semi-modular or Eurorack system too. 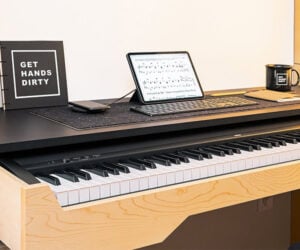 Cristiana Felgueiras of Get Hands Dirty shows off an awesome piece of furniture she designed for efficiency in a tiny apartment she’s building out. The desk has a floating design and a built-in electronic piano that slides out from underneath its work surface. She also built a matching rolling cabinet with a secret drawer. 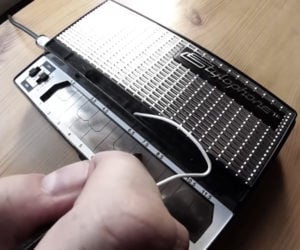 The Stylophone is a very basic analog electronic instrument that uses a conductive pen and a metal circuit board of “keys” as its input device. But with the help of a Digitech Whammy effects pedal and some quick pen play, maromaro1337 jammed out some iconic rock riffs on the monophonic keyboard. More here.

Playing a Guitar Through a Modular Synthesizer 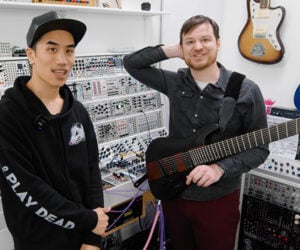 Guitarist Rob Scallon previously played his guitar through the world’s largest effects pedal board. This time, he and fellow musician Andrew Huang ran the sounds of this electric guitar through his enormous wall of modular synthesizers, resulting in some of most interesting sounds ever produced by a string instrument. 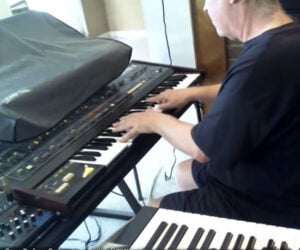 For some reason, music from 8-bit and 16-bit games seems more memorable than most modern games. It probably has something to do with retro synthesizers drilling the sounds deeper into our brains. If you love retro game music too, hit play and listen up as BearKeys performs on a Roland Jupiter-6 synth. Part two here. 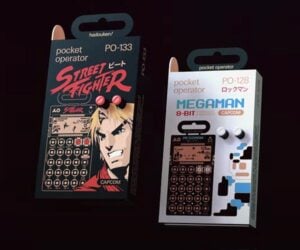 Hadouken! Teenage Engineering has teamed up with Capcom to create two pocket-sized sound makers, the PO-133 Street Fighter, and the PO-128 Mega Man. The Street Fighter model is a micro sampler with a built-in mic, while the Mega Man version is an 8-bit synthesizer. Both include sounds based on the games. 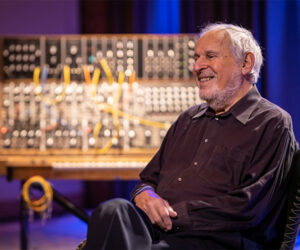 Electronic music trailblazer Herb Deutsch invented the Moog synthesizer with Bob Moog. Their genius propelled synths into the mainstream, changing the sound of music forever. Deutsch tells all in episode one of the Giants documentary series, which invites legendary electronic music innovators to share their untold stories. 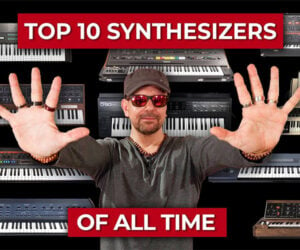 Since the late 1960s, synthesizers have become a critical component of music production – especially in genres like alternative, pop, and dance. Musician and synth enthusiast Doctor Mix walks us through the ten most famous and essential electronic music makers of all time, along with examples of the sounds they each produce. 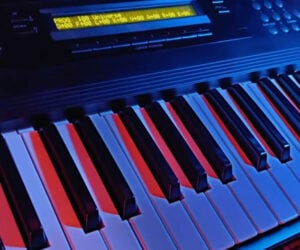 Are you an ’80s or ’90s kid? Then you’ll want to hit play on Estuera’s two-part video series about the synthesizers and presets that defined the sounds of two decades. Along the way, he performs excerpts from more than 40 tracks and makes them sound just like the originals, thanks in part to Arturia’s synth emulation tech.

I Can’t Go for That Instrumental Cover 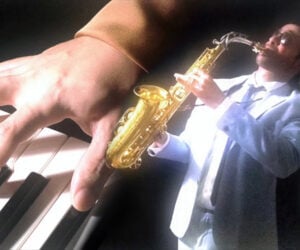 The Daryl Hall & John Oates track I Can’t Go for That (No Can Do) is a true classic. KOSMusic teamed up with saxophone player Kevin Bene to perform this instrumental cover that nailed the 1980s synth sounds of the original so well that we kept expecting the vocals to kick in. 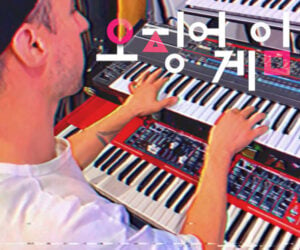 Jung Jae-il’s soundtrack from the hit show Squid Game is equally intense, memorable, quirky, and creepy. YSSY combined the tracks Pink Soldiers and Way Back When and transformed them into a 1980s inspired synthwave song suitable for another Netflix series, Stranger Things. 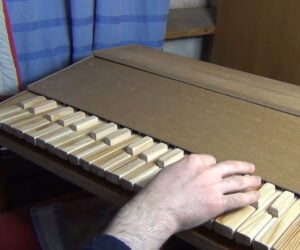 Rather than go with an off-the-shelf synthesizer, Edward Black Rose built his own from scrap wood. Its wooden keys make strings vibrate between a laser and a photocell, then send that signal to a software synthesizer. It’s not ideal for creating polyphonic sounds, but it’s a clever design nonetheless. 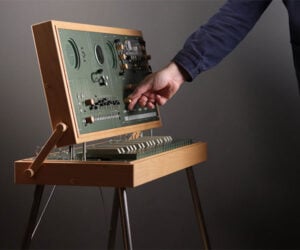 Artist Love Hultén is a genius at designing and building retro-modernist technology. His EC1 is a custom analog synthesizer and beat making machine that folds up briefcase style when not in use. Someday, we hope to commission Love to build us something for The Awesomer HQ.

How a Mellotron Works 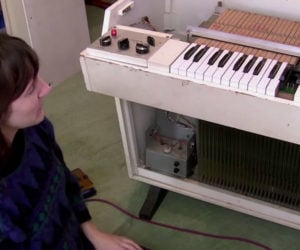 Bell Tone Synth Works provides a look inside a keyboard that predates the digital sampler. The Mellotron used multiple strips of magnetic tape to play sounds recorded from other musical instruments. The M400 shown here is from the 1970s, but you can see an earlier model here. 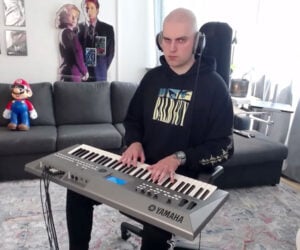 Stone-faced musician Seth Everman is back at his synth with a performance of Nirvana’s 1991 classic Smells Like Teen Spirit done in a bunch of different styles. The steel drum version makes us want to lie on a beach sipping Piña Coladas while the sun beats down on us. 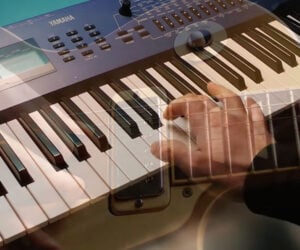 KOSmusic is a master of the synthesizer, but in this clip he makes it clear he can play the guitar too. Crank up your speakers to 11 for this perfect extended cover version of The Alan Parsons Project’s epic 1982 track Sirius, also known as the entrance music for the Chicago Bulls.