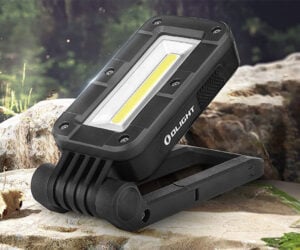 This compact work light has a versatile design that works as an angled stand, a hanging hook, a handle, and a magnetic base. Its COB LED emitter kicks out 400 lumens of smooth and diffuse light, maximizing your work area. It’s also got a flashlight built into its side for when you need a more focused beam. 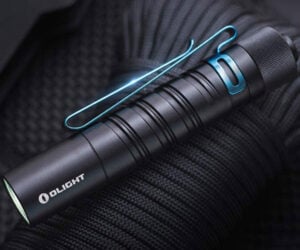 Powered by a single AA battery, the Olight I5T produces a up to a 300 lumen beam that’s visible from up to 196 feet. Its double helix body knurling provides grip and visual interest, while its removable blue pocket clip adds a splash of color. Available in black or a speckled blue stardust finish. 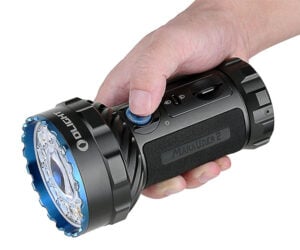 An upgraded version of the X7R Marauder, the Marauder 2 flashlight blasts out up to 14,000 lumens and has a throw distance of 800 m – roughly half a mile. Its rotary knob is the smartest brightness control we’ve seen on any flashlight, and its three 5000 mAh batteries can be used to recharge your phone or other gadgets. 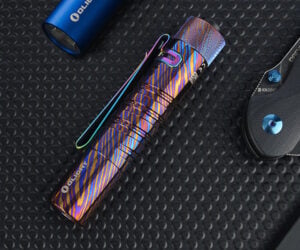 Olight’s very special flashlight features an artfully crafted body made from titanium with a swirling Damascus pattern. The palm-sized light has a 300-lumen maximum brightness, and its body has a double-helix knurled design which adds to its visual interest while providing grip. Limited to 2021 pieces. 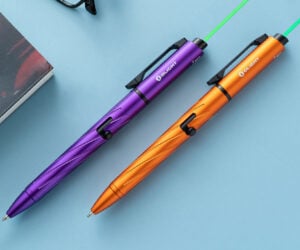 Olight’s bolt-action pen has a couple of tricks up its sleeve. In addition to its writing abilities, it has a green laser pointer and a tiny 120-lumen LED light in the top part of its barrel. It comes in black and limited edition purple and orange variants, and is also available in a bundle with the compact i3T flashlight. 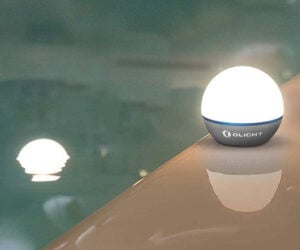 This tiny 2.13″ diameter sphere provides a splash of light wherever you need it. It has both a warm white light and red emergency light, and runs for up to 56 hours on its low setting. It’s IPX7 waterproof so you can float it in water, and has a magnetic back for attaching to metal surfaces. 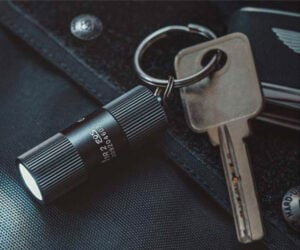 This tiny keychain flashlight punches out plenty of light for its size. Its new 5-sided glowing CSP LED cranks out 150 lumens, providing plenty of illumination with a maximum throw distance of 131 feet. It’s IPX8 waterproof and has a built-in micro-USB rechargeable battery. Comes in black or desert tan. 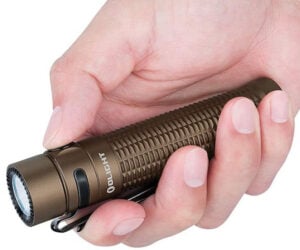 Olight’s mini flashlight uses a powerful 3500mAh 18650 battery to kick out up to 1500 lumens from a high-performance LED. Its body is made from aluminum and can survive immersion in 6 feet of water. It features a ridged grip, dual switches, and a magnetic charging connector. Available in black, desert tan, and camouflage. 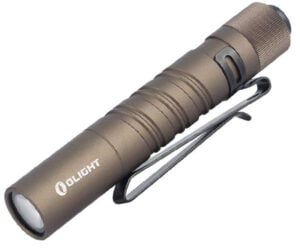 Olight’s small-but-mighty pocket flashlight features a water-resistant aluminum body with a unique knurled grip design. It offers 180 lumens of brightness from a single AAA battery, and has a TIR optic lens for a smooth beam. The zig-zag pocket clip offers carrying versatility. Available in desert tan and black. 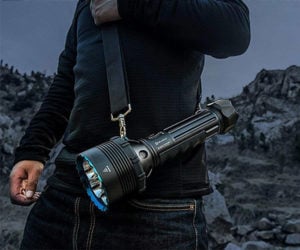 Olight’s ridiculously over-the-top flashlight cranks out a blinding 25,000 lumens of brightness. It packs in six Cree XHP70.2 LEDs, and runs on a whopping eight 18650 rechargeable batteries. It’ll only run for 3 minutes at its top brightness, but 100 minutes at 6400 lumens, which is more than enough for anything we can think of.