Road Rally to the Arctic

Words and Images by Jeff Zurschmeide

There are many legendary motorsports events in the world, but most are out of reach for the average person. To run the Baja 1000 or the Dakar rally requires a pro-level team. But there’s one event that can lay claim to the title of Most Extreme Driving Event, and pretty much anyone can do it. That event is the Alcan 5000 Rally. 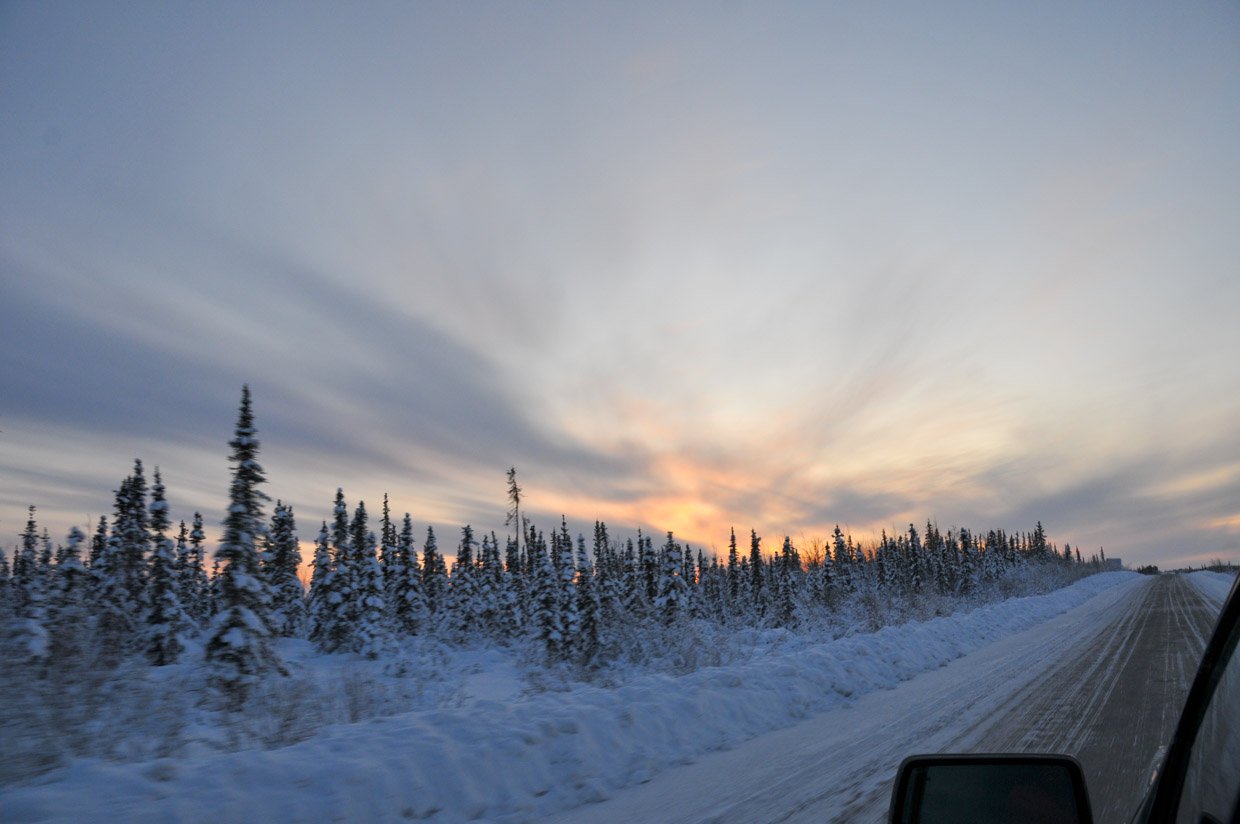 The idea behind the Alcan is simple: Teams leave from Seattle and drive north through Canada until they reach the shore of the Arctic Ocean. Then they turn around and finish the rally somewhere in the far north. This year, the end point was Anchorage, Alaska.


Along the way, teams compete in a variety of time-speed-distance rally challenges, ice racing, and what are called “extreme checkpoints.” An extreme checkpoint is one where just getting there is the challenge. 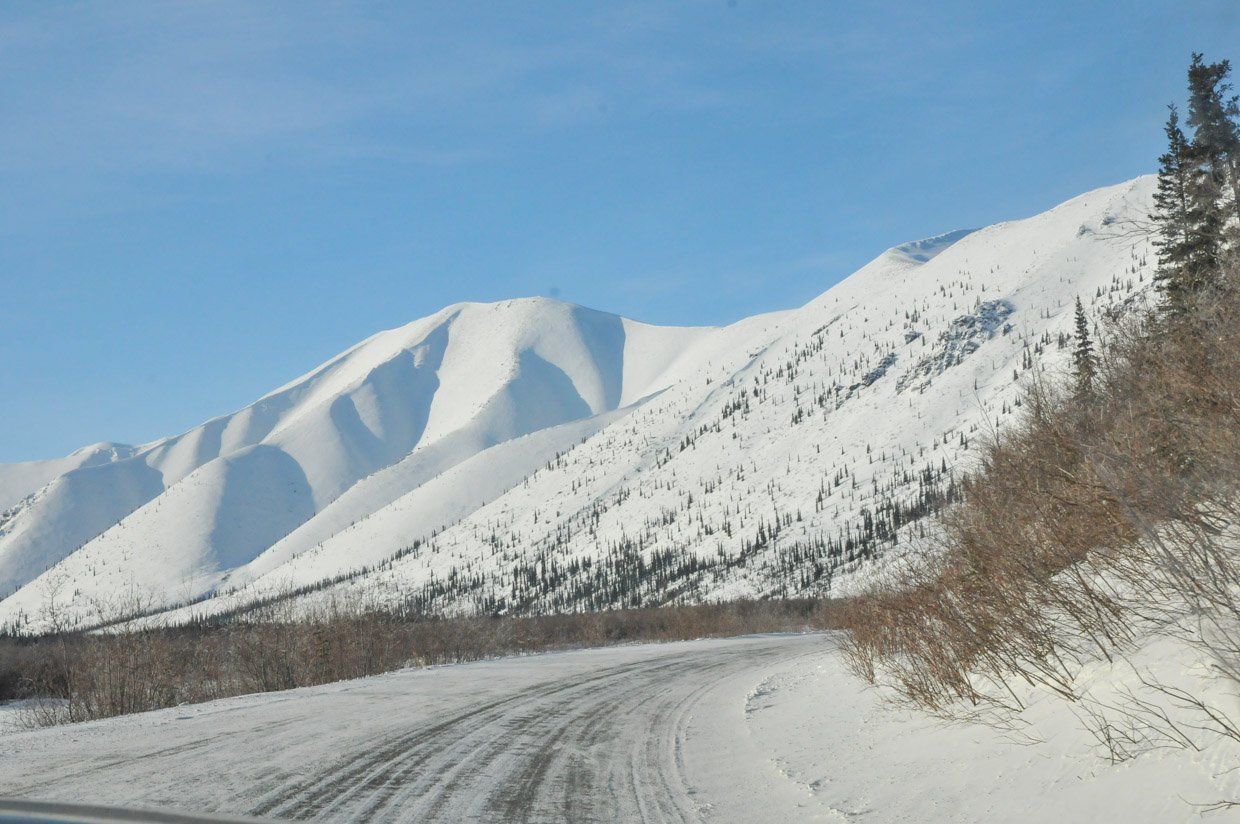 How We Did it


The lure of the Arctic brought this writer and two friends to join the 2020 Alcan Rally. We outfitted a new GMC Sierra 1500 AT4 with a set of Nokian Hakkapeliitta LT3 studded winter tires, and brought along a 12-volt electric kettle and an Aeropress espresso maker. We’re not savages, after all.

The truck was provided for us by GMC, and came with the new 3.0-liter Duramax turbo-diesel engine, and the AT4 package included a 2-inch body lift, underbody skid plates, recovery points, and GMC’s nifty CarbonPro carbon fiber truck bed. The AT4 also includes a special Automatic mode 4WD system, which maintains traction and stability control protection while delivering power to all four wheels. 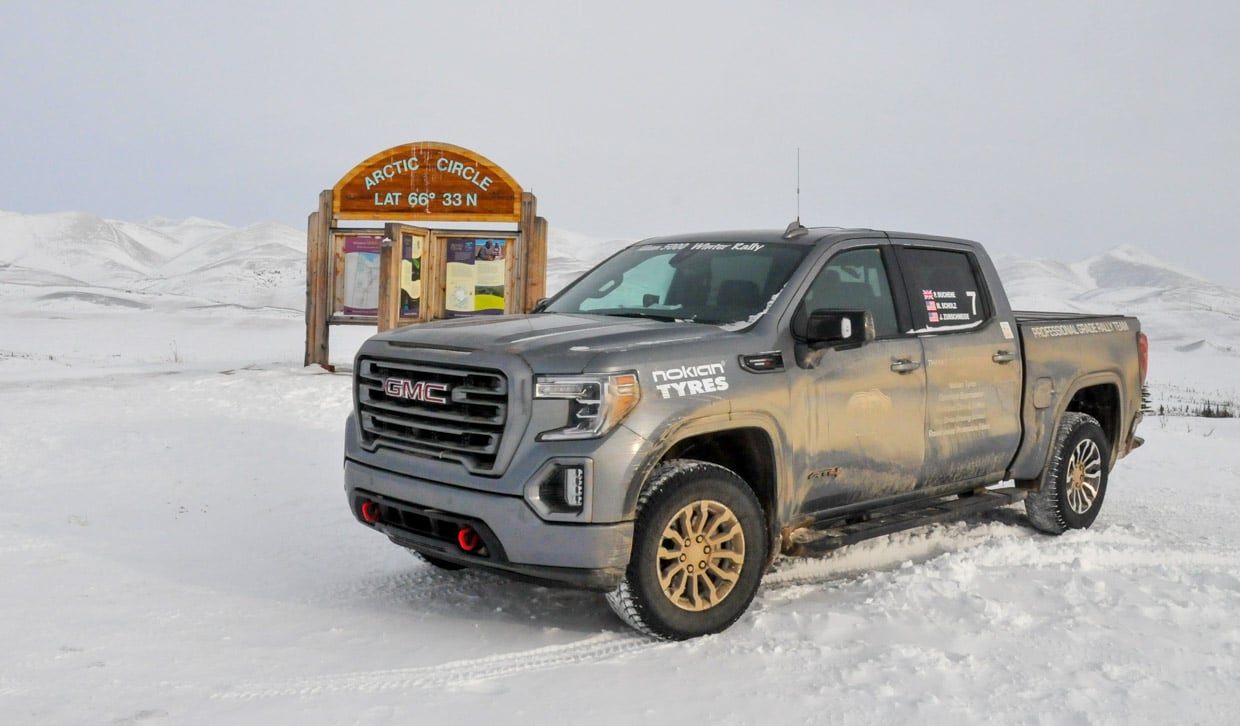 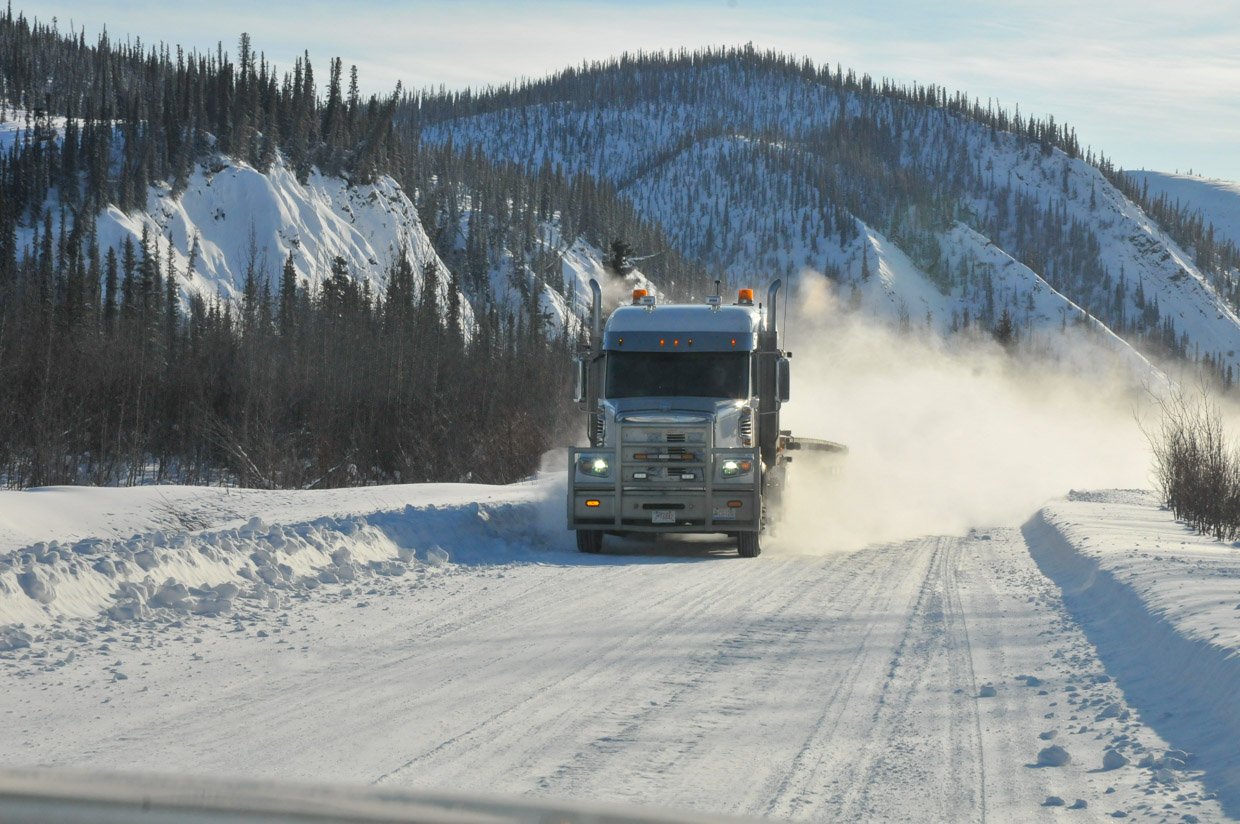 
This year’s rally left Seattle on February 26, and finished in Anchorage on March 6. Between those two points, the event stopped in Quesnel and Fort Nelson, B.C., Whitehorse and Dawson, Yukon Territory, Inuvik and Tuktoyaktuk, Northwest Territories, and Fairbanks, Alaska. All told, the rally covered a little over 5,000 miles in the middle of winter.

Tuktoyaktuk is the goal of the whole event. Located at 69 degrees north latitude, Tuk is one of the most northerly places in Canada that you can drive to. Tuk lies at the mouth of the MacKenzie River, on the shore of the Arctic Ocean. For most of the year, you can’t tell where the land ends and the ocean begins, but if you make it this far it’s less than 1,500 miles to the North Pole. 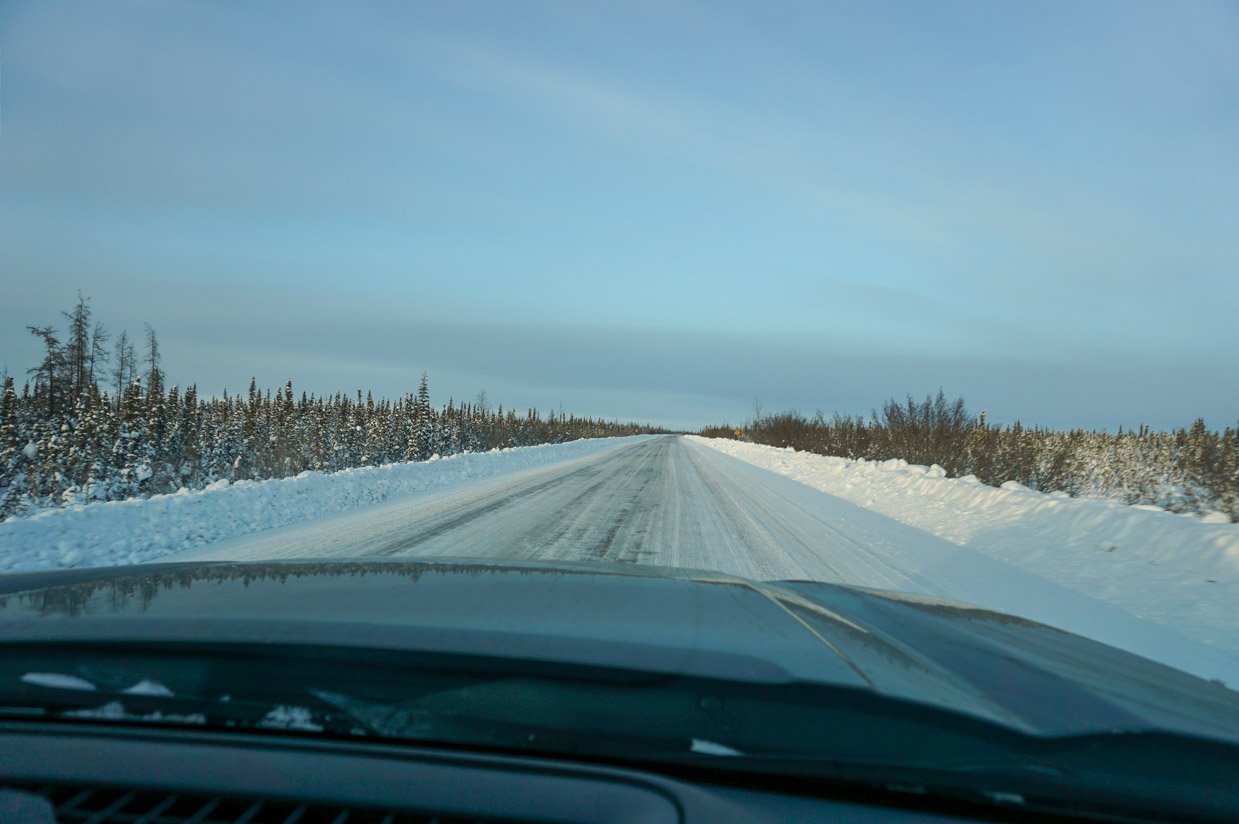 Getting There is Half the Fun


Standing on the beach at the Arctic Ocean in temperatures hovering around 40 below zero gets you pretty good bragging rights, but there’s got to be more than that to convince people to drive for the better part of a week to get there. Of course, the far north has many more attractions that bring participants back to the rally over and over again. 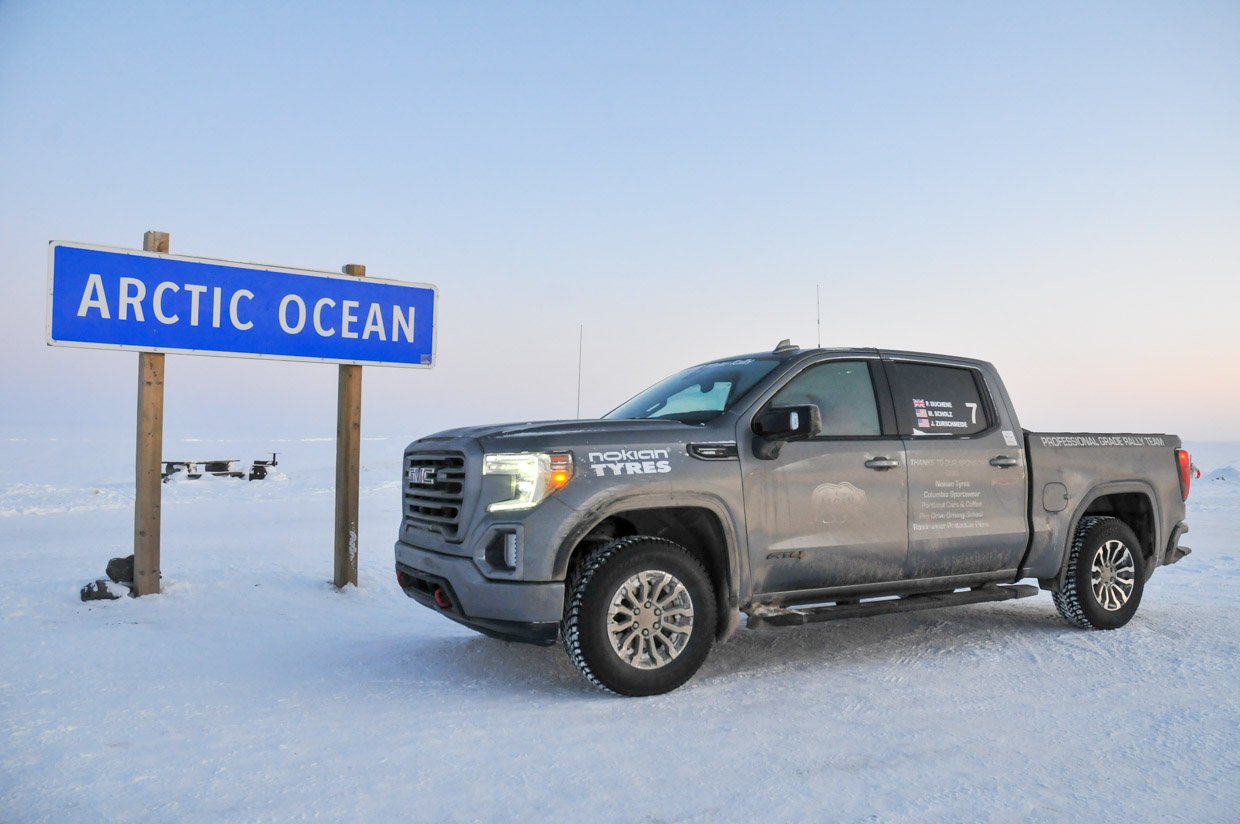 For one thing, the rally passes through some of the most beautiful, remote, and unspoiled places in North America. Wildlife sightings are virtually assured, and mountain ranges you’ve never heard of stand in coatings of perfect white. If you like scenery, it’s up there waiting for you.


Another reason to go is the fact that the rally is a mobile party. Arriving in town, the rally fills the restaurants and bars at a time of year when not too many tourists are hanging around. We made new friends everywhere we went, and joined a select fraternity in Dawson. 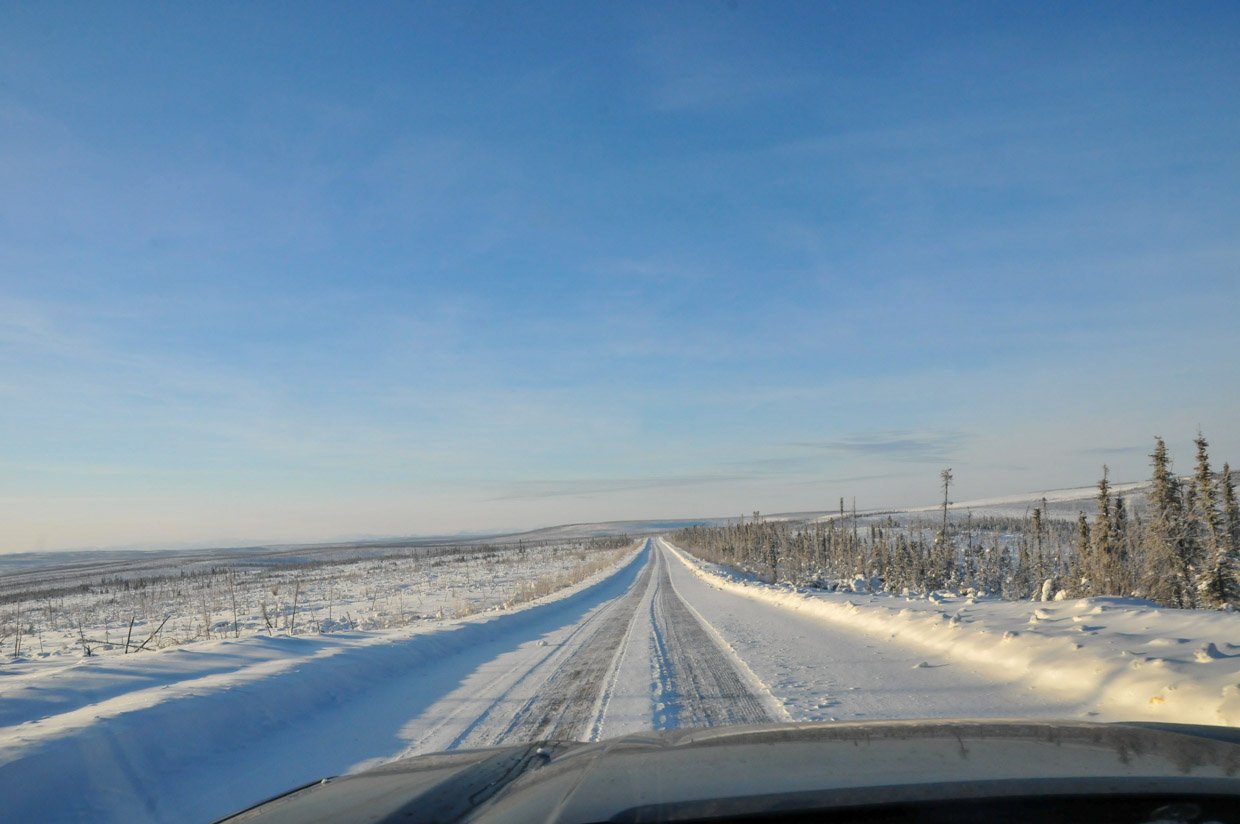 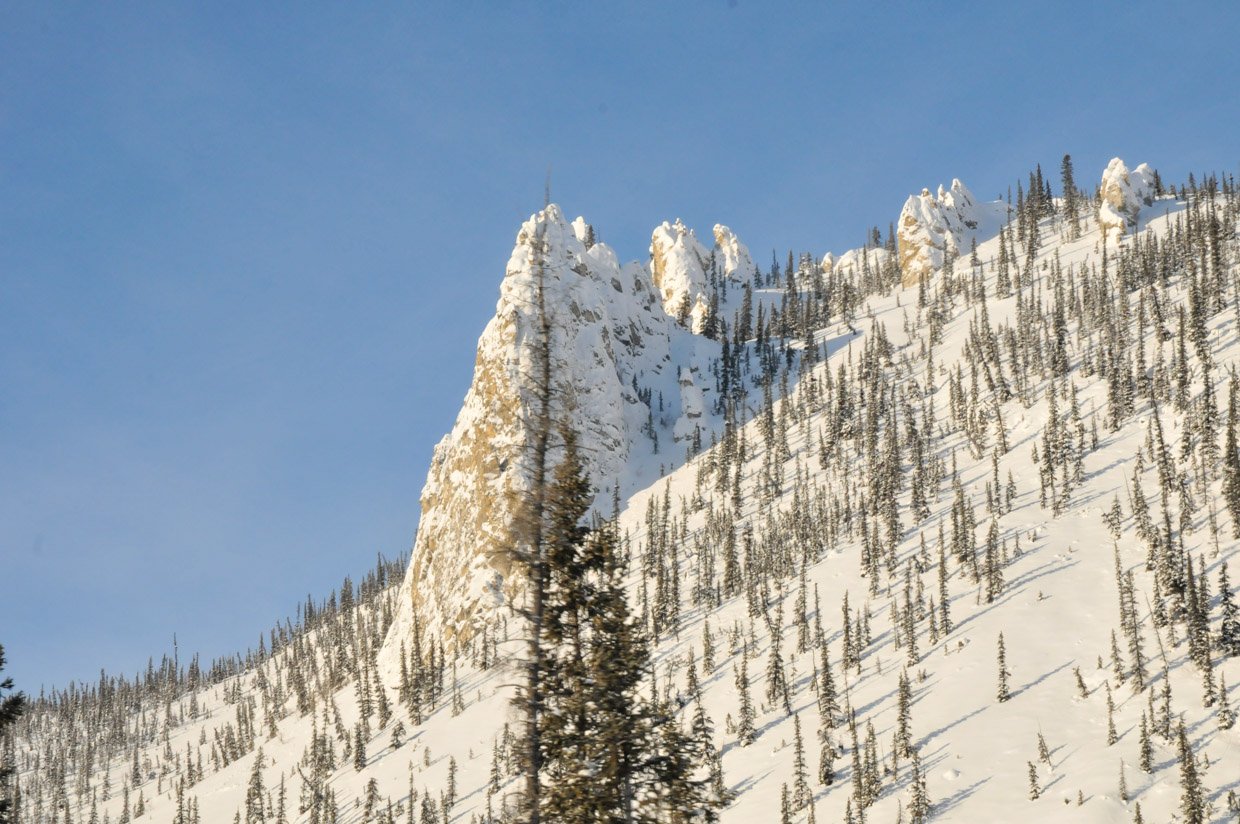 
One of the best reasons to take on the Alcan Rally is the relationships that are forged under adversity. On our way south from the Arctic Ocean, the lonely Dempster Highway was closed due to a blizzard in the Richardson Mountains. We had to make an unplanned stop in Fort McPherson, NWT. With about 30 people chasing a few motel rooms, we planned out who was sleeping on what piece of the floor. The nearby church also invited anyone to come in and sleep – they keep a supply of cots around for just that reason.

A quick trip to the grocery store next door to the motel netted us enough groceries for a potluck dinner. The motel opened its kitchen to us, and together we made some food for the evening. With a full stomach and a bottle of wine to share, the experience becomes part of the great adventure. 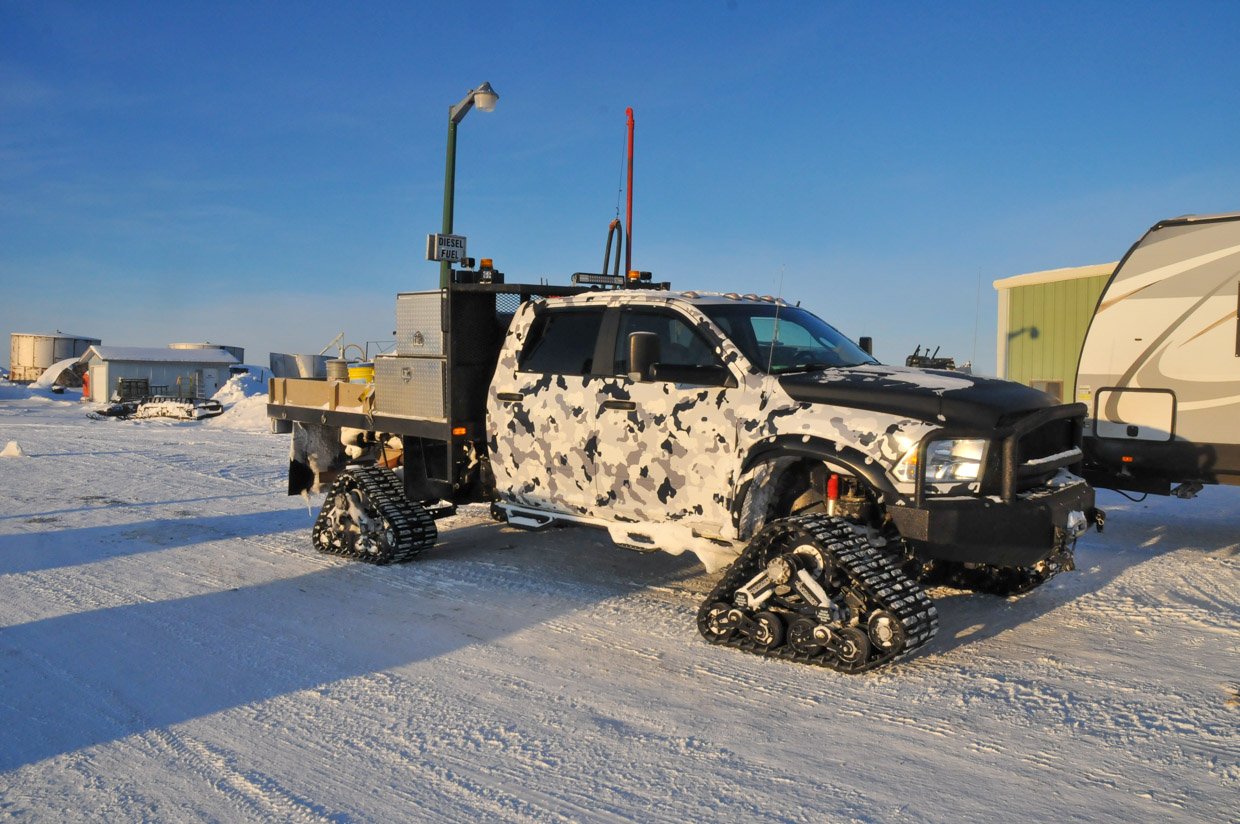 The Spell of the Yukon


Our GMC truck carried us over 6,000 miles, through bitter cold and deep snow. But more than that, we ventured to a part of the world that almost no one ever gets to see. The Arctic in winter is stunningly beautiful, a little bit dangerous, and totally enchanting. If you get the chance to go, don’t miss it. The next Alcan rally happens in the summer of 2022, and the next winter adventure in February of 2024. Find out more at www.alcan5000.com. 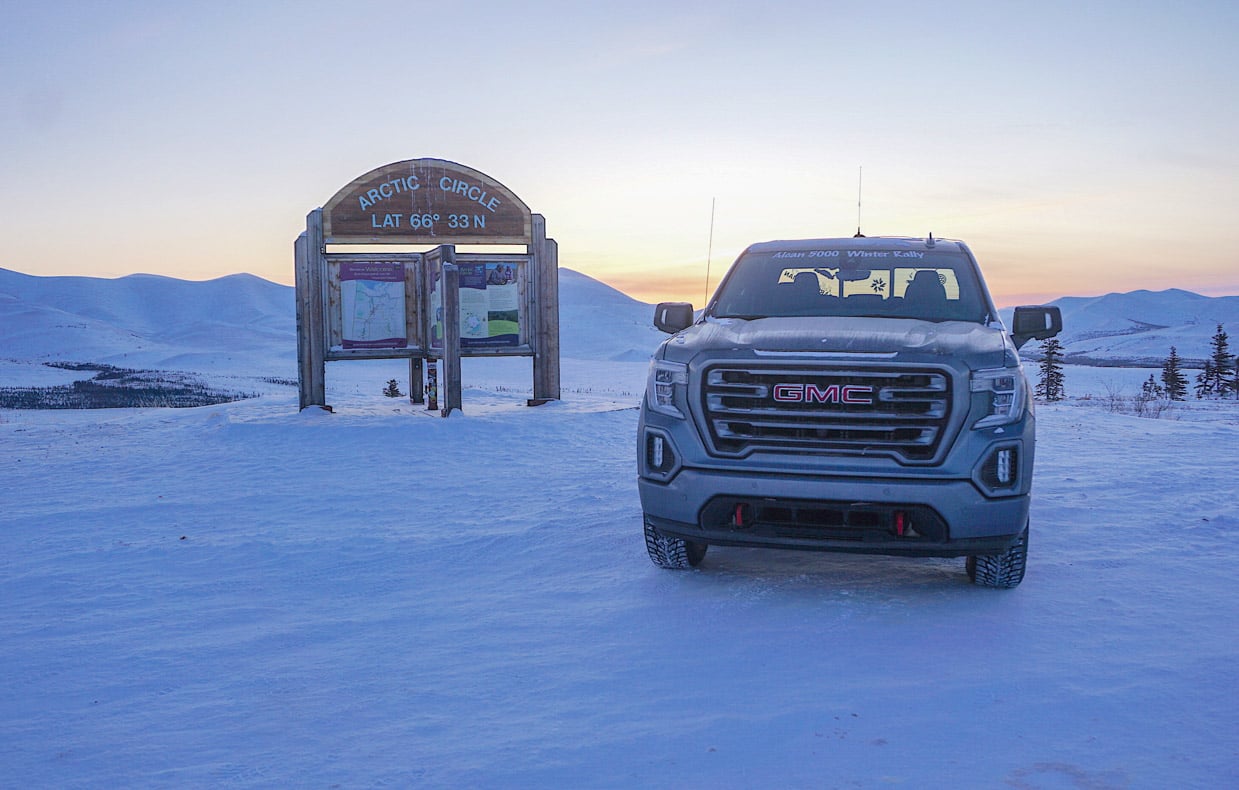 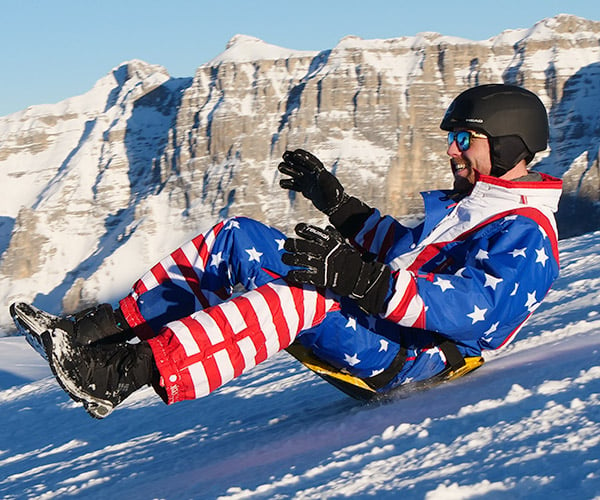 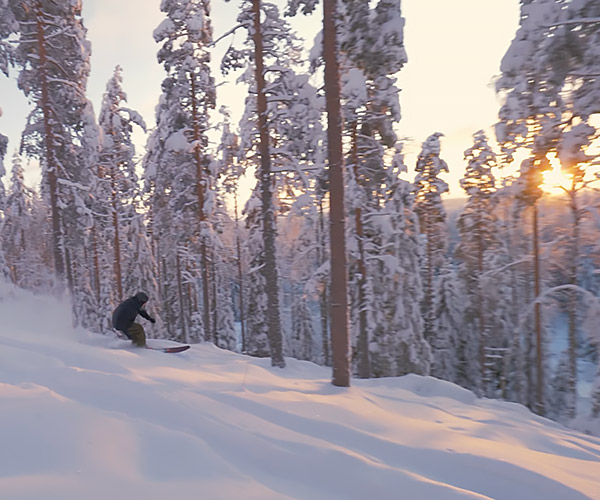 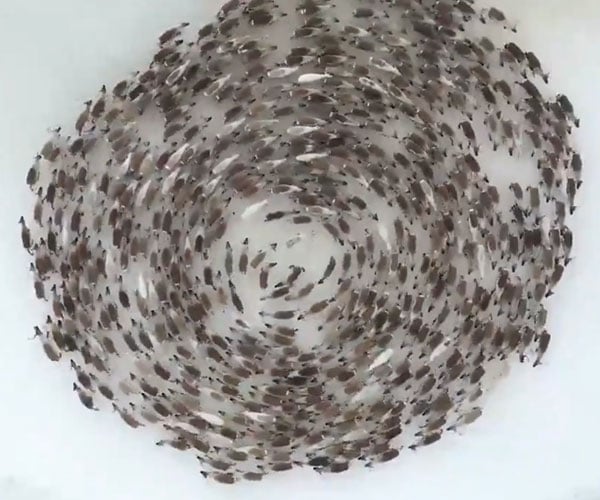 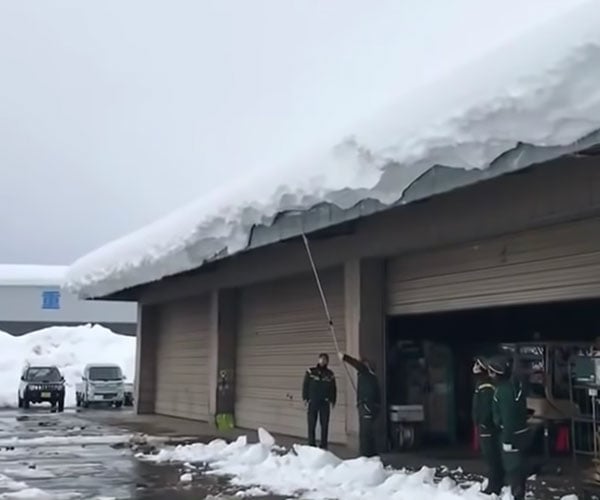