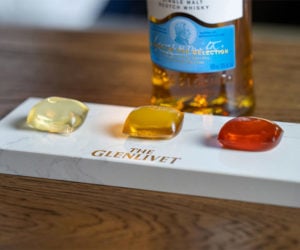 Described as “glassless cocktails,” scotch whiskey maker The Glenlivet’s uniquely packaged booze is sure to raise some eyebrows. Each edible pod is filled with a 23ml whiskey cocktail, offering up a burst of flavor much like taking a shot. While they’re a cool idea, they’re not headed to the US at this point.