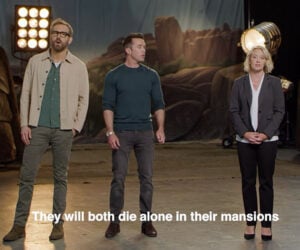 Actors Ryan Reynolds and Rob McElhenney have teamed up to purchase a football club in Wales. In order to greet the local fans, they hired a translator to relay their messages in their native tongue – and it doesn’t go as expected. Keep an eye on FX for their documentary series about the team and their involvement.