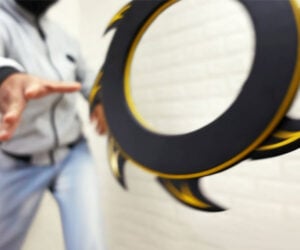 A chakram is a throwing weapon that first appeared in the 5th-century BCE in India. The original weapons were simply a sharpened circle, but video game versions have evolved to add deadly spikes around their circumference. In this video, DIYer The S shows off an awesome retractable-spike chakram made from popsicle sticks.