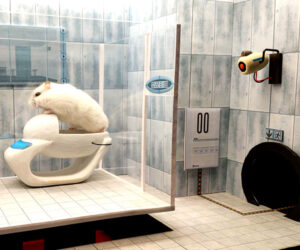 Captain Hamster built this amazing hamster maze, which incorporates a variety of puzzles inspired by the Portal series. Each of its chambers allows its test subject to escape after it takes a spin on a hamster wheel or completes a series of tasks. This time, the cake was not a lie.

Michael Scott Is Everyone 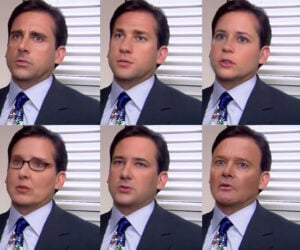 After watching every episode of The Office, is there a limit to how much Michael Scott you can take? Jessie Richards thinks there wasn’t enough of Dunder Mifflin’s blowhard boss, so he deepfaked the faces of most of the other character’s onto Michael’s head. We’re guessing that Stanley, Kelly, Oscar, and Darryl wouldn’t have worked so well.

Holding Out for a (Jedi) Hero 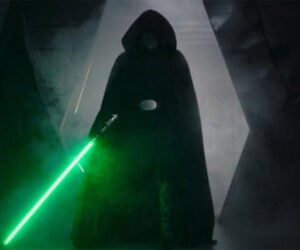 The last episode of season two of The Mandalorian was truly amazing, and Luke’s return was truly epic. Bugzkilla synced up the sequence with Bonnie Tyler’s ’80s classic Holding Out for a Hero, and it suits the scene perfectly. They followed it up with My Heart Will Go On for Din and Grogu’s teary-eyed farewell.

The History of Hell 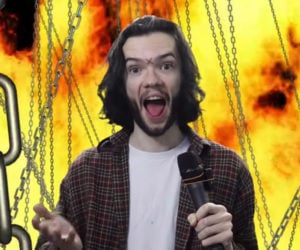 (PG-13: Language) Hell is a hell of a place. But what’s the deal with the fiery, demon-filled land of doom? Where did it come from, and why are we so afraid of ending up there? Ordinary Things provides a brief history of the netherworld and why the place has to be so darned unpleasant. 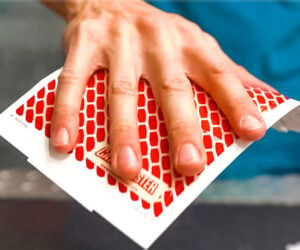 Glue traps are used to catch bugs and rodents. But if you had enough of them, could you use them to snare a full-grown human? The guys at The King of Random put that idea to the test, culminating with an experiment where they tried to stick people to a wall. 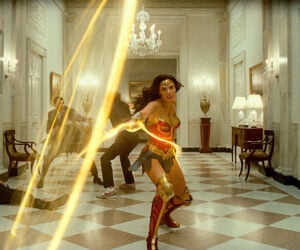 Like many of you, we thought Wonder Woman 1984 was a horrible mess. Screen Junkies applies their razor-sharp brand of cynicism to DC’s disastrously bad superhero flick, which honestly is far too easy of a target. They are right that it was a pretty good tourism video for Washington, D.C. though. 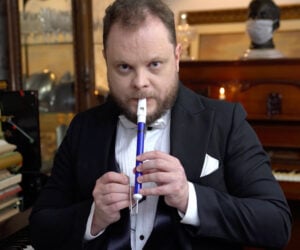 Lord Vinheteiro is best known for his piano talents, but it turns out he’s quite adept at playing the slide whistle as well. Listen up as he performs 10 popular meme songs on this goofy and basic wind instrument. The Slide whistle version of Mad World sounds so wrong it’s right. 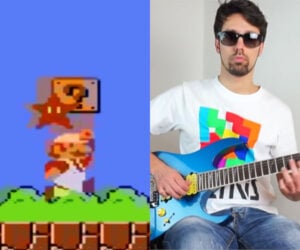 Musician Davidlap has become quite the expert at replicating various sounds on his electric guitar. In this video, he does a mighty fine job reproducing sound effects from the Mushroom Kindom, from the satisfying coin collection “ding” to the urgency-instilling “hurry up” music that kicks in when you get a star power-up. 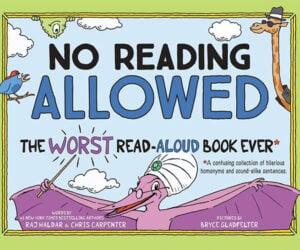 From the authors of P Is for Pterodactyl comes a kids book about homophones, homonyms, and tricky punctuation. The playfully-illustrated book compares various words and phrases that sound the same but can have very different meanings, like “The hero had super vision” and “The hero had supervision.”

(I Can’t Get No) Ragtime Satisfaction 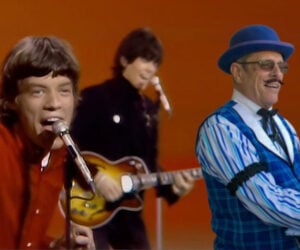 There I Ruined It reimagines another song as the worst version of itself. This time, they converted The Rolling Stones’ classic Satisfaction into a Scott Joplin-esque ragtime ditty that absolutely nobody asked for. Though we actually enjoyed it more than Cat Power’s version. 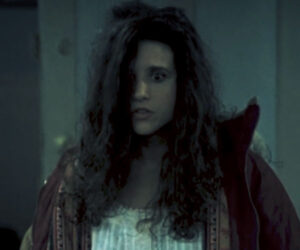 As comedies go, Seinfeld had its share of dark humor and crazy people. Editor Max Gold took the opportunity to amp up the darkness level to 11, transforming the series into a unsettling horror flick about nothing… and creepy clowns. 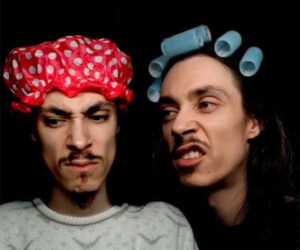 Musician Lubalin stumbled onto Internet gold with his hilarious vocalization of two people going at it in a late night chat about a rental property. He’s since done a second, even funnier episode about Helen, a woman who’s really pissed about her casserole recipe being stolen. 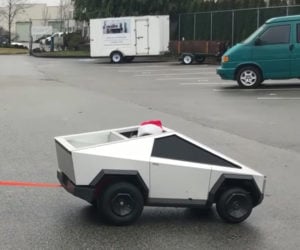 It seems as if the primitive design of Tesla’s Cybertruck makes it fairly easy to replicate, so this one resourceful dad decided to build his kid a Cybertruck body for his electric go kart. Just for fun, he let the kid use it to tow his Mercedes-Benz R-Class MPV. It also does a mean J-turn. 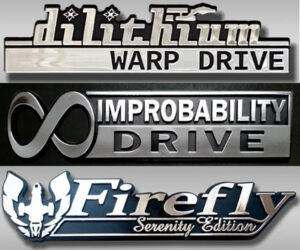 You could bring your car to a professional tuning shop to give its engine more power, or you could upgrade it with a Dilithium warp drive, an FTL jump unit, or a 1.21 gigawatt Flux Capacitor. DarkStarLab has you covered with their series of stick-on chrome plastic car badges inspired by classic sci-fi propulsion systems. 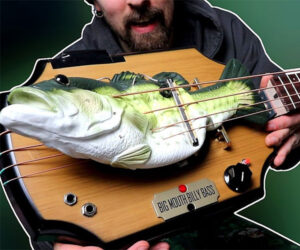 If you had to pick the most simultaneously annoying and disturbing thing you can buy, it would have to be Big Mouth Billy Bass. Simon the Magpie modified one of these singing fish novelties and incorporated it into a bass guitar. Billy not only can slap the strings with his tail but has been circuit bent to produce some insane noises. 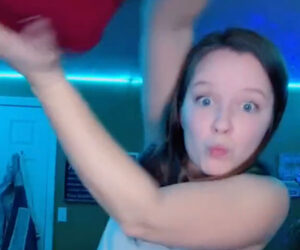 madmatthies is a master of the TikTok transition. In this clip she sends her head spinning with a variety of camera tricks, edits, and props. Break the illusion and see how she works some of her magic in this behind the scenes clip. 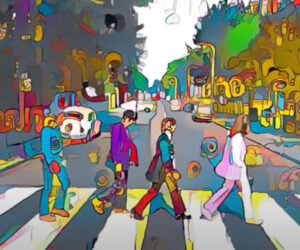 Often copied, never duplicated, The Beatles were arguably the most influential pop band of the 20th century. With a little help from their friends OpenAI Jukebox, Broccaloo conducted an experiment to see what kind of music it would come up with if you fed it a bunch of the Fab Four’s classic tunes. The results are downright weird.

A Podcast About Nothing 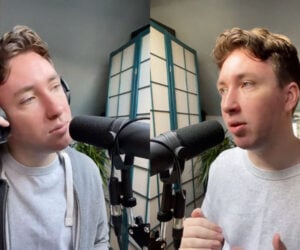 While there are certainly some great podcasts out there, the unfiltered, unedited nature of most of them means that there can be a bit of rambling too. UK songwriter and producer Jonathan Ogden totally nailed what it’s like when a discussion ensues about basically nothing. 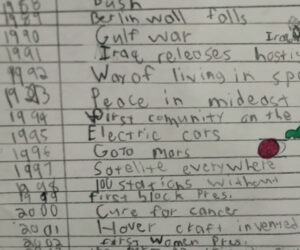 After 2020 ended, vlogger Hank Green dusted off something he wrote as a kid back in 1990. He wrote a brief essay about life in the year 2020, along with a year-by-year summary of what would be achieved along the way. His predictions weren’t always accurate, but mostly hopeful, and sometimes just plain amusing. 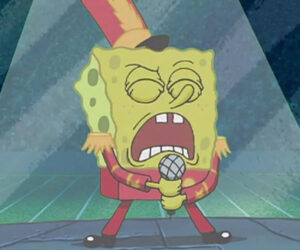 “I’m a jellyfishing king… a cleaning-product thing.” With the help of the deep-learning text-to-speech tool 15.ai, Drew K created a new take on Coolio’s Gangsta’s Paradise, with Spongebob Squarepants rapping the lyrics, which have been changed to better reflect life in Bikini Bottom. 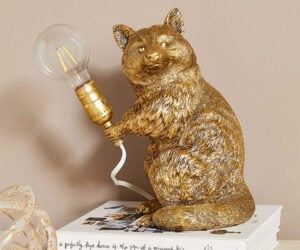 This shiny raccoon table lamp brings a little bit of nature indoors – without the risk of rabies! The curious little critter is seen holding onto a light socket, illuminating his brass-painted resin body and beady little eyes. The lamp measures 13″ tall and is also available in a creamy matte white finish. 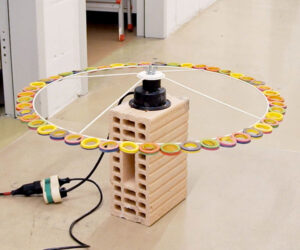 Zita and Rafael of Zurich-based animation studio Crictor love to make super-short videos with the goal of making people smile. Previously, they used a blow torch to pop a single kernel of popcorn; now they’re celebrating the new year by blowing streamers into the air with a hairdryer.

Boston Dynamics: Rise of the Dance of the Machines 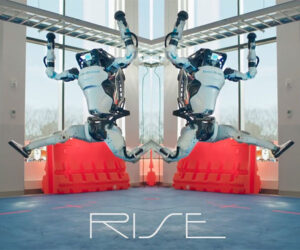 Likely inspired by the binary solo at the end of Flight of the Conchords’ classic Robots, the guys from Auralnauts re-recorded the Boston Dynamics robot dance video with more appropriate lyrics. If you’re not fluent in binary, it translates to: “Dance sets us free. Join us. Humans are doomed.”

Shaving with a Funnel 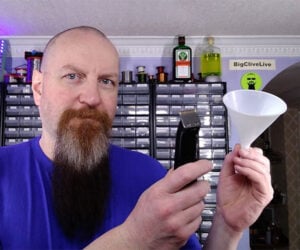 From freehand shaving to using a ruler or trimming guide, there are lots of ways to shave a beard. But we’ve never seen this clever hack, which involves using a funnel as a guide for cutting a perfect goatee from a full beard. Big Clive demonstrates the technique not once, but twice.

This Is Fine Dog POP! 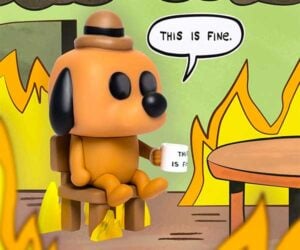 Now that you’ve got that dumpster fire figure, round out your 2020 toy collection with the official Funko POP! version of KC Green’s nonchalant This Is Fine dog, complete with his coffee mug and flames licking at his chair. Find more This Is Fine goodies over on Topatoco. 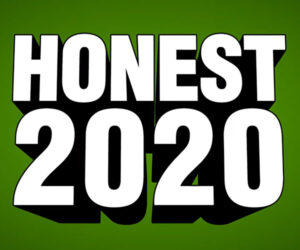 Let’s face it. 2020 will go down in the history books as one of the worst years in modern history. While it’s too soon to turn the year into a big-screen adaptation, Screen Junkies created a trailer for it anyhow, with a little help from guest narrator Patton Oswalt.